After getting off the train in Paris, I walked to my Airbnb, only about fifteen minutes from the station, in the Opera district. I met the owner of the building in the lobby, who led me up several long flights of stairs to my room, which was... tiny. 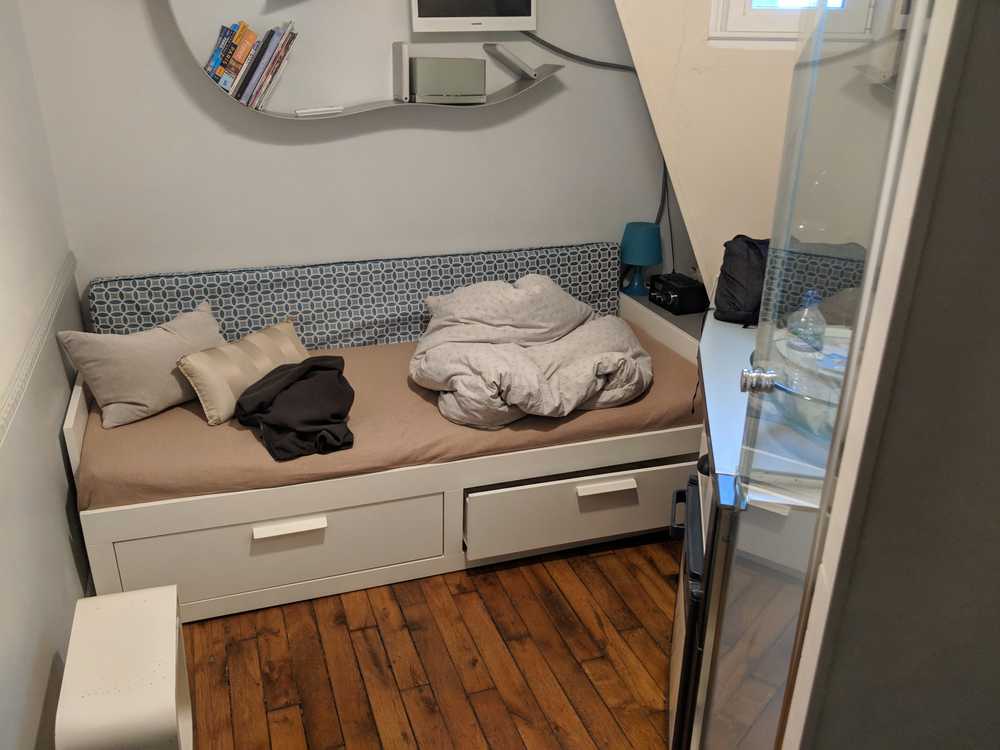 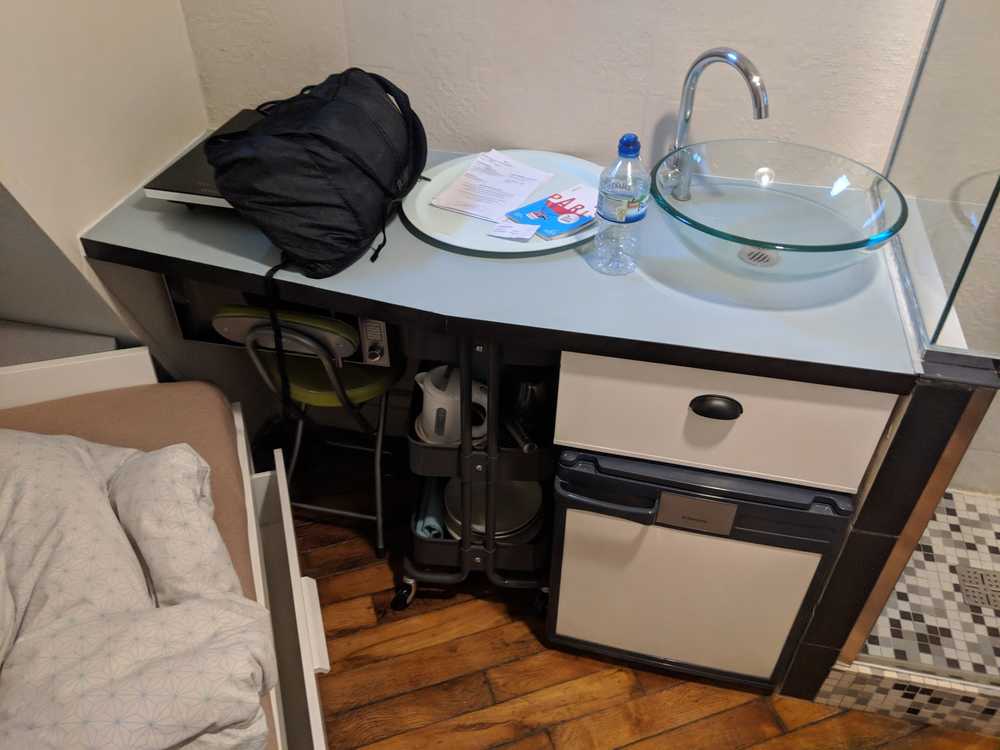 It was on the 6th floor, and had a shared toilet with the other units along the hall. It had its own shower cubicle, though, and every amenity they could manage to stuff in the room. Kind of impressive, though still rather claustrophobic.

After decompressing and spending some time reading about where to eat, I decided to make my way down to Boullion Chartier. It's a 100+-year old restaurant serving cheap, traditional French cuisine. While it had a huge line out the door, they were stuffing single diners like myself in wherever they could fit them, so I walked right on in. 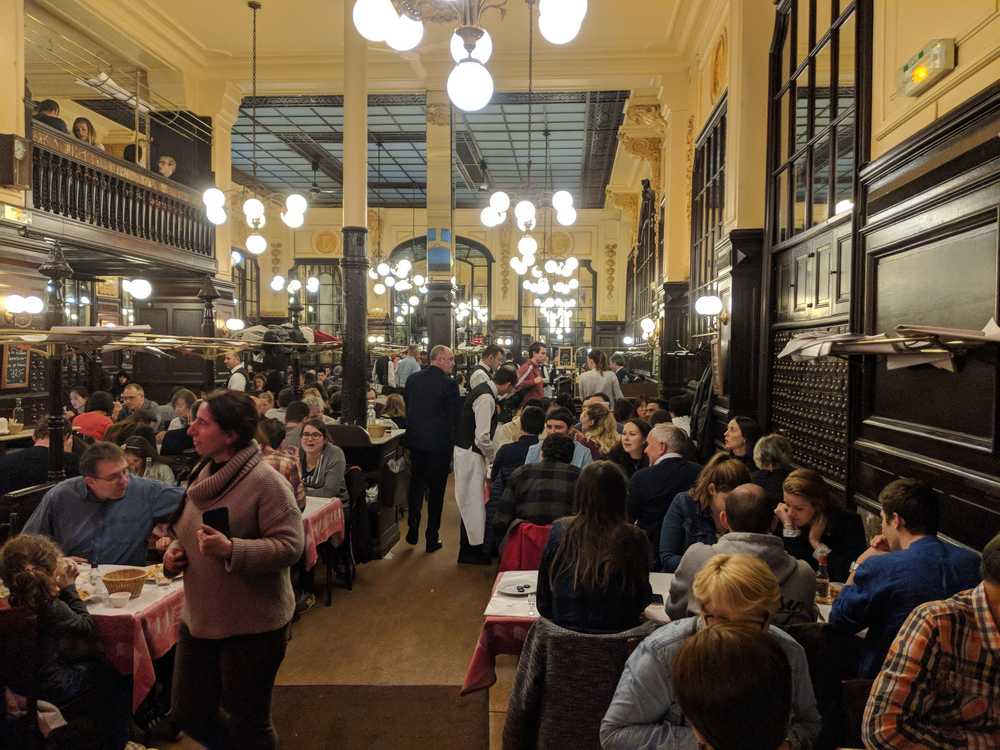 I ended up sitting across from an incredibly charming older English man, who had lived in France off and on for the past several decades. He told me a lot about the city, as well as his own trips to America. On this whole trip, I often failed at meeting new people and interacting with them (outside of hostel lounges), and I was very lucky to sit across from someone so interesting and extroverted.

I mentioned my tiny Airbnb to him, and he laughed, since he knew exactly what it was - a converted maid's room. Finally, I understood what the hell had led to my living quarters (I thought it had been an illegally-converted office or something).

Afterwards, I went ahead and got an early rest. It was my first night in privacy, and not in a hostel, in about a week, and I had a loud of sleep to catch up on.

The next day, I woke up early and had nothing on my schedule except a timed-entry ticket for the Musée d'Orsay, so I walked around a bit. From my Airbnb, it was only 20 minutes walk down to the Louvre and the Jardin des Tuileries, so I just kinda meandered.

The garden was nice, though, as I soon discovered was an issue with every public space in Paris, it was surrounded by incredibly loud and congested roads, depriving it of some of its potential peace. Still, it had a few nice sights. 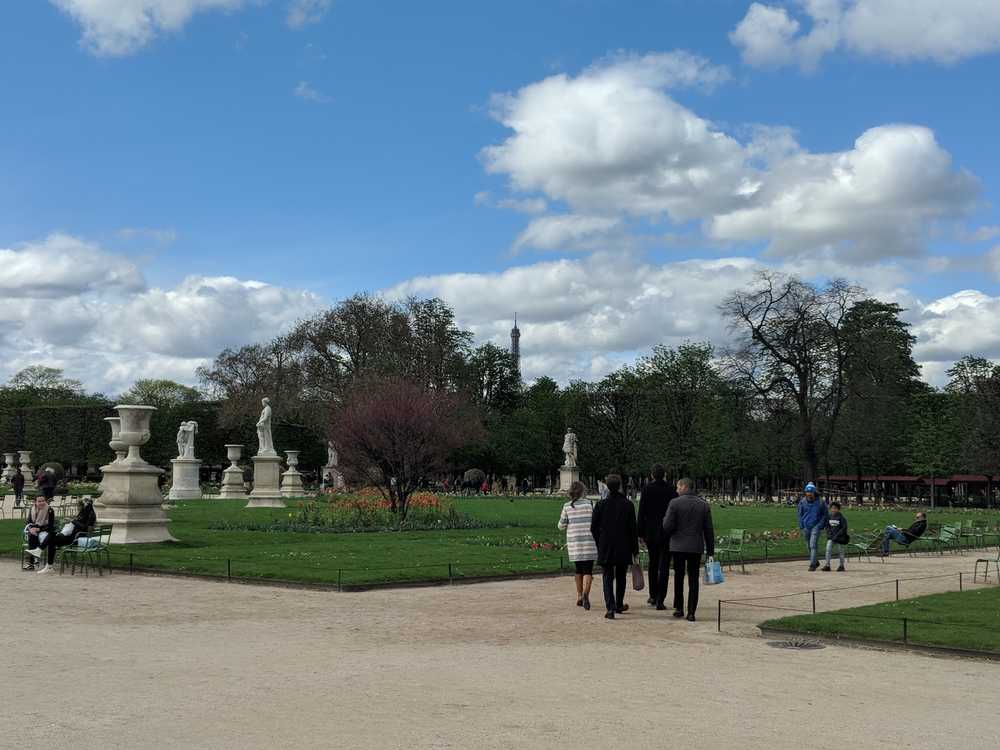 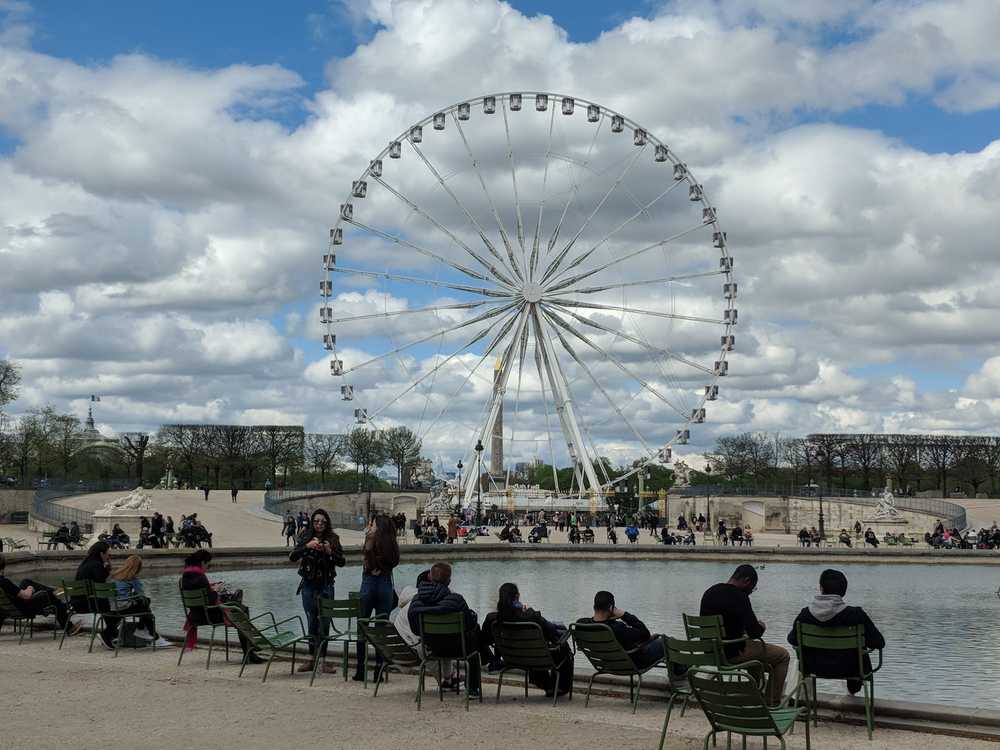 I was pretty hungry, and, as I did a few other times in Paris, was having an incredibly difficult time finding anywhere non-touristy to eat. I ended up ducking in a random sandwich shop and getting a pretty delicious baguette thing, though, which I ate on the steps of the Musée d'Orsay, while watching a band play. It was all pretty wonderful. 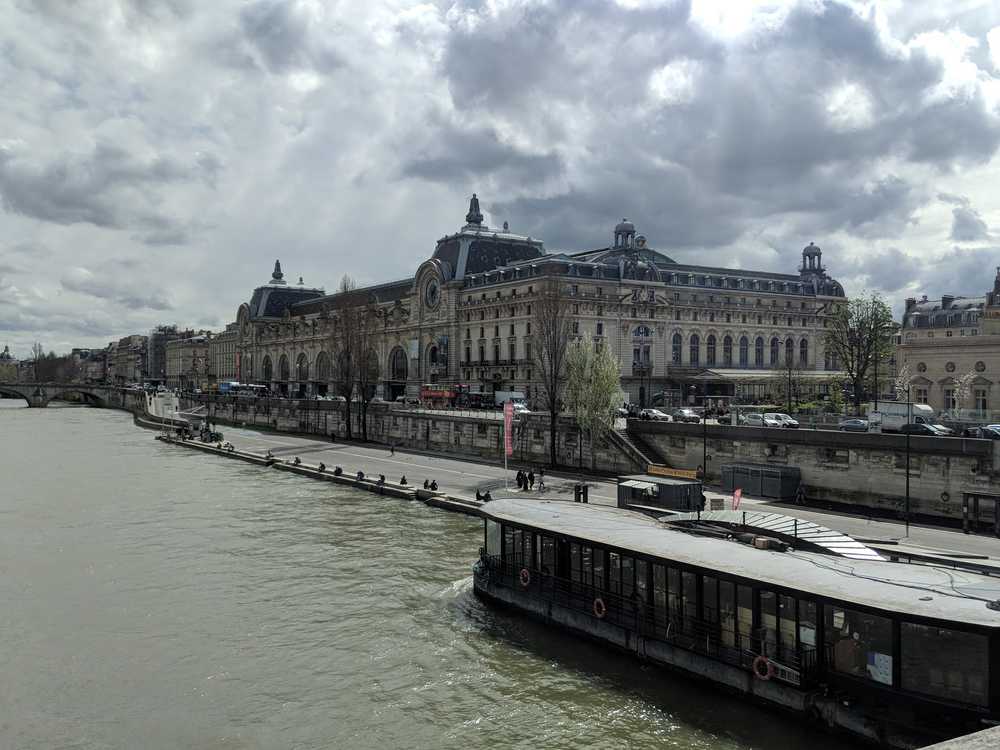 Unfortunately, I ended up finding out I had bought my ticket on a site that required me to actually pick my ticket up from a store, and the nearest one was a distance away. Frustrated, I ended up deciding to walk to the Eiffel Tower. I walked on by a few famous places on the way, like the National Assembly and Les Invalides. 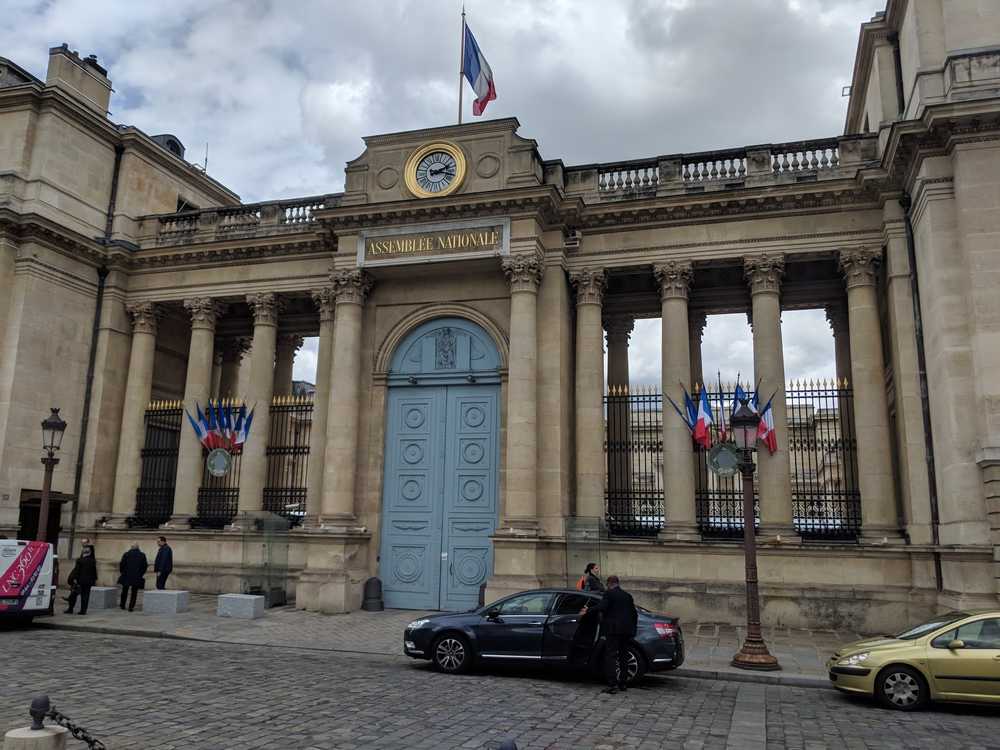 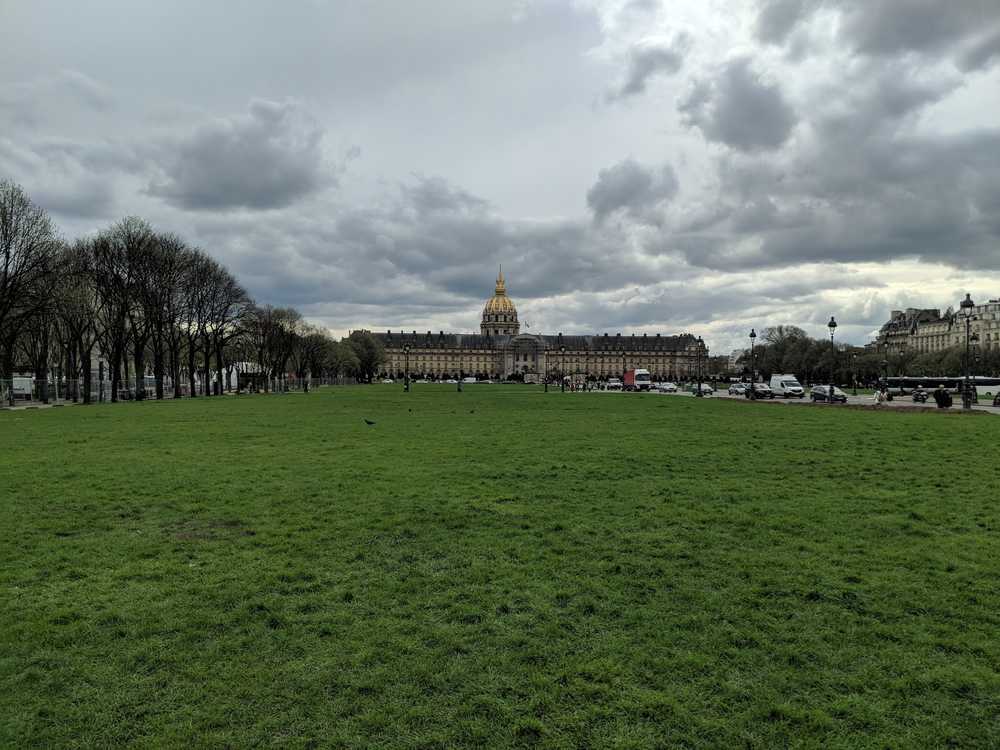 Finally, I made it to the tower. Now, I had no ticket or anything, and figured there was no way I was gonna actually get to go up the thing on a whim. There was a giant security line to get into the plaza under the tower, where you buy tickets to go up, and I figured that all I'd get to see would be a gift shop or something. 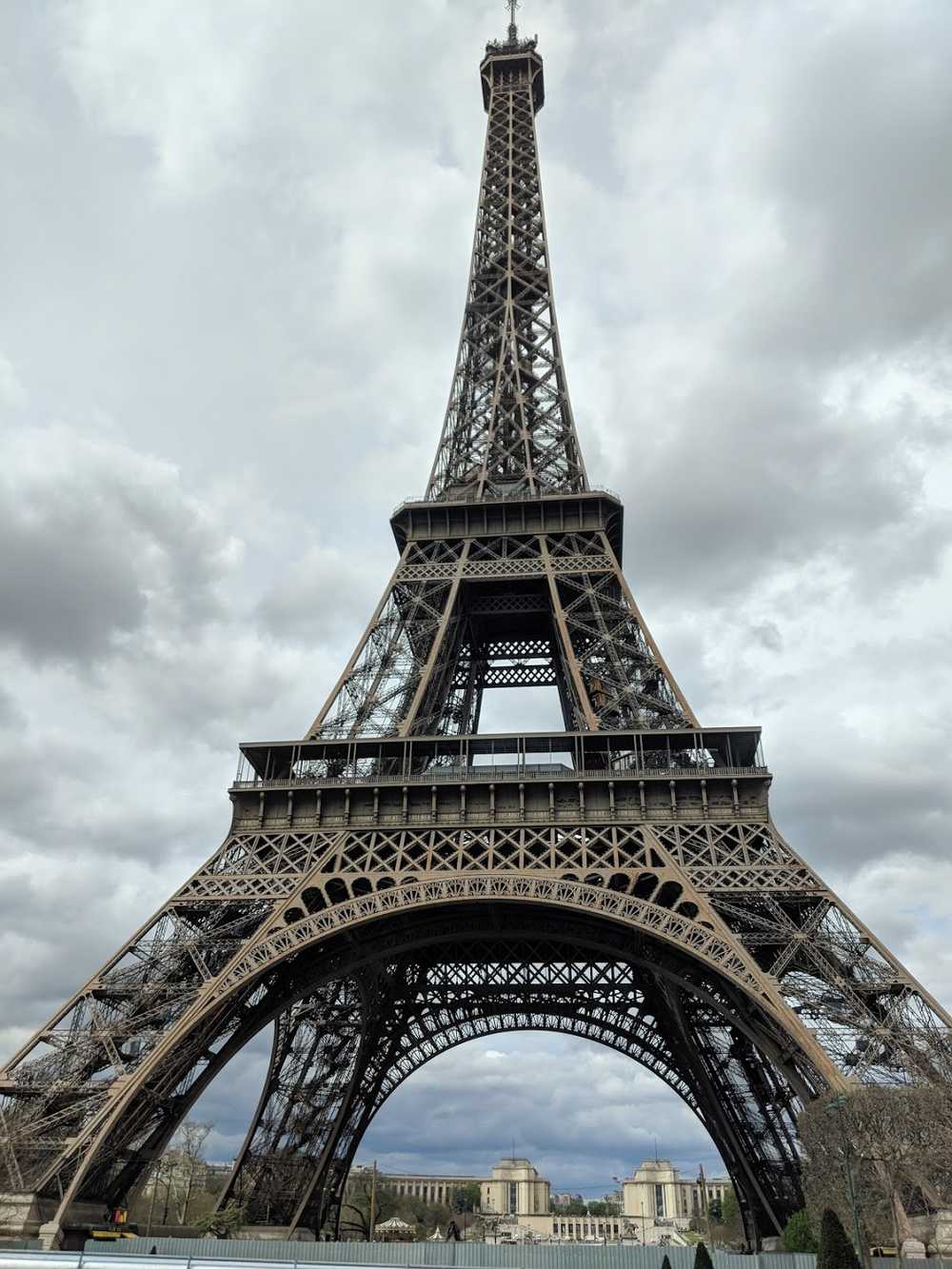 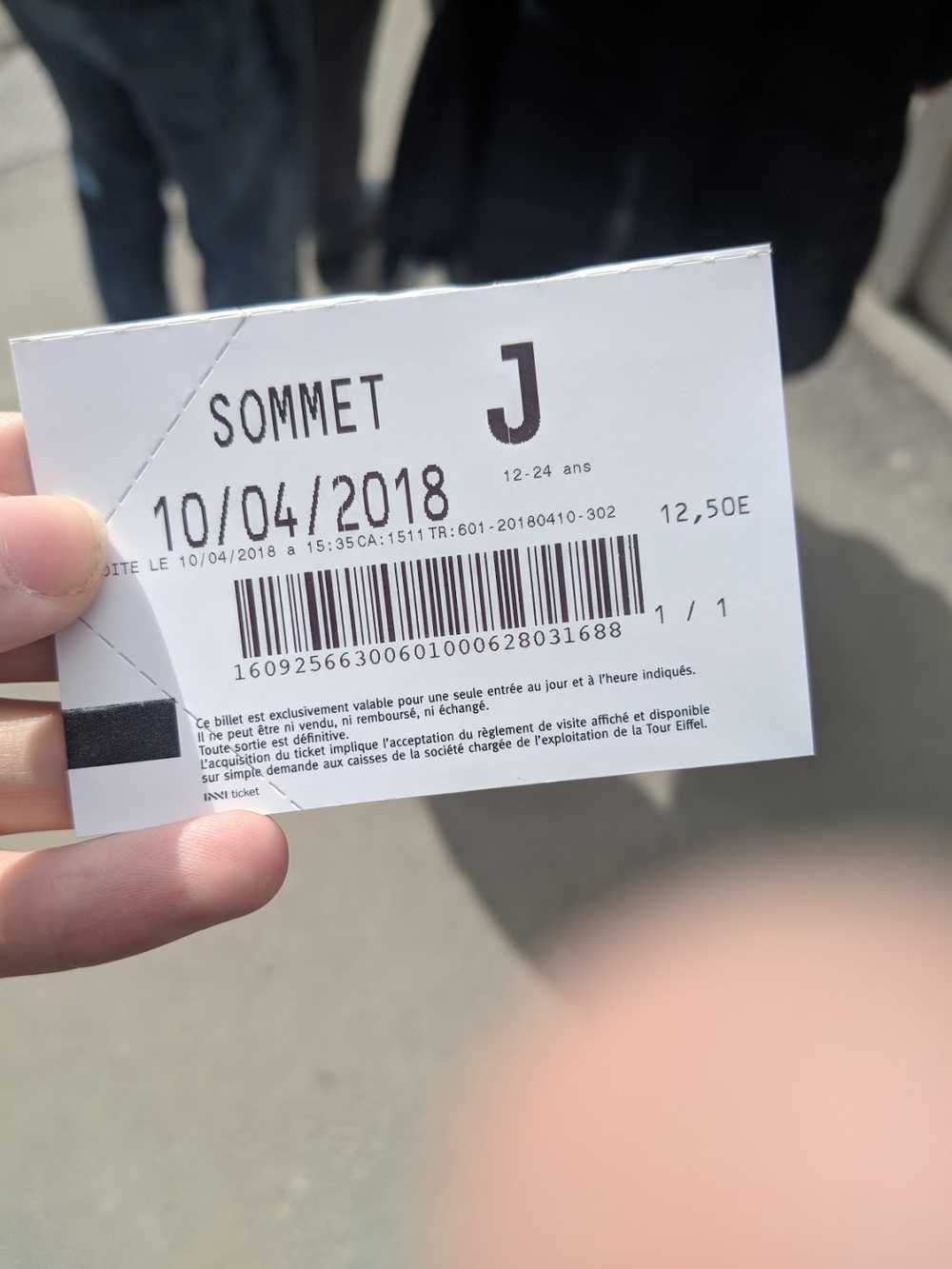 The Tower turned out to be divided into a few levels, with different elevators between them. The first elevator took us up one leg of the tower, past the first level, to the second.

I'd always figured the tower just had, like, small catwalks between elevators, but it turns out the first and second levels are both proper floors of a building, as odd as seems. In addition to the gift shops and snack bars selling comically overpriced half pints of Heiniken, there's an extremely fancy restaurant on the second floor.

On my way up, though, I had no time for this, as I instead had to stand in a very long line for the summit. Honestly, it probably wasn't any more than fifteen minutes, but standing outside on the relatively exposed floor, it felt a lot longer. Still, I tried to take in the views: 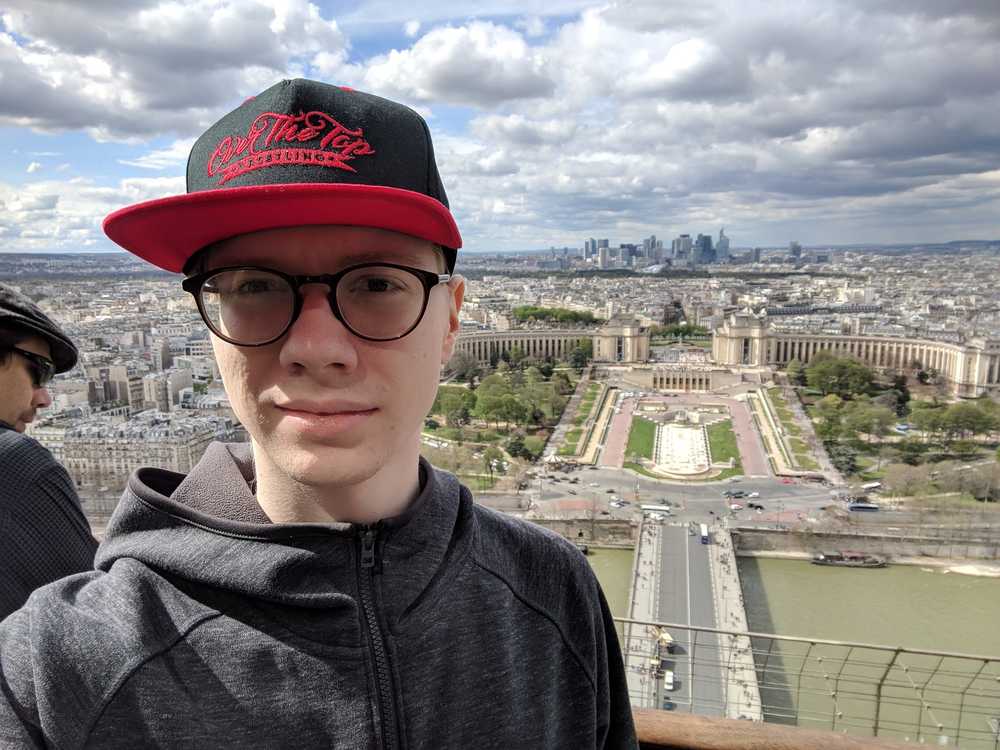 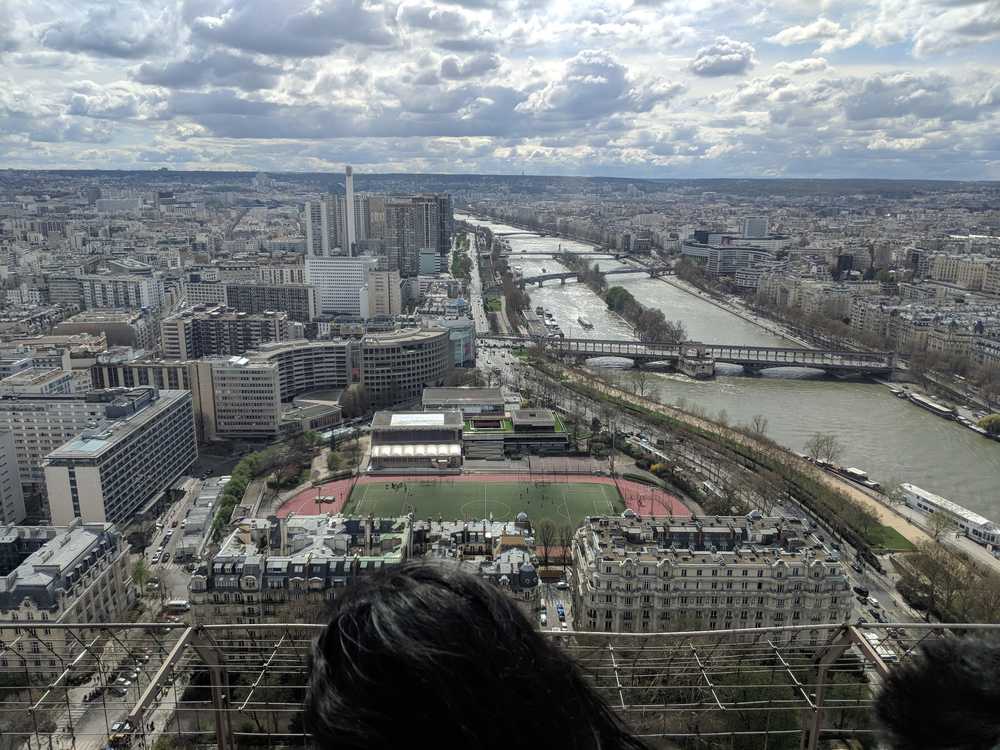 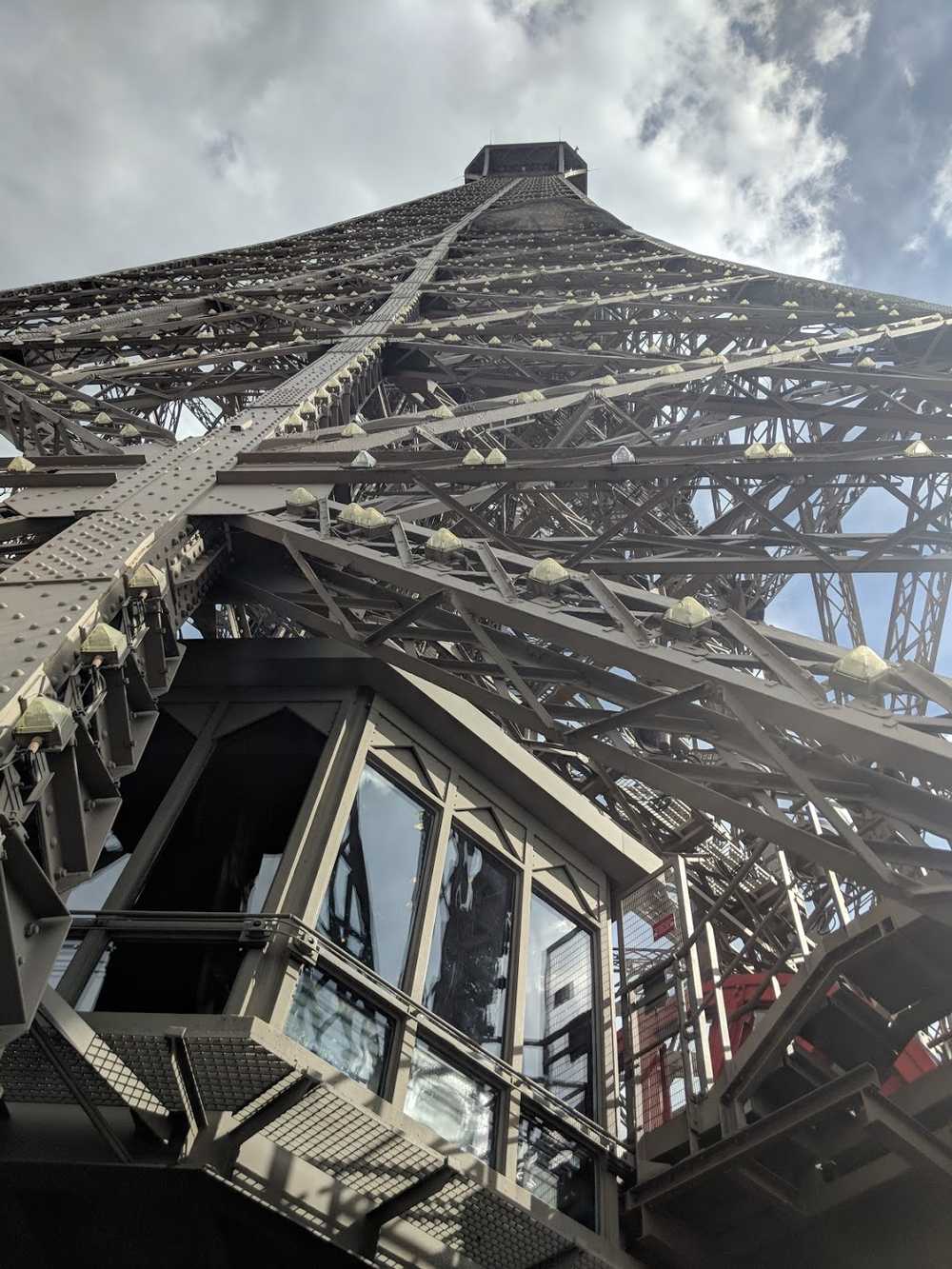 Finally, I got crammed into an elevator along with a bunch of other folks for the final journey to the top. And while the magic had started to wear off in line, there really is something special about looking out the window of an elevator and seeing nothing but Paris below and the scaffolding of the tower from inside.

The top opened into an enclosed platform, but I quickly went upstairs to the exposed viewing area, surrounded by, uh, a thick chain link fence, presumedly to deter further would-be parachuters. Still, I tried to take some good photos through the fence: 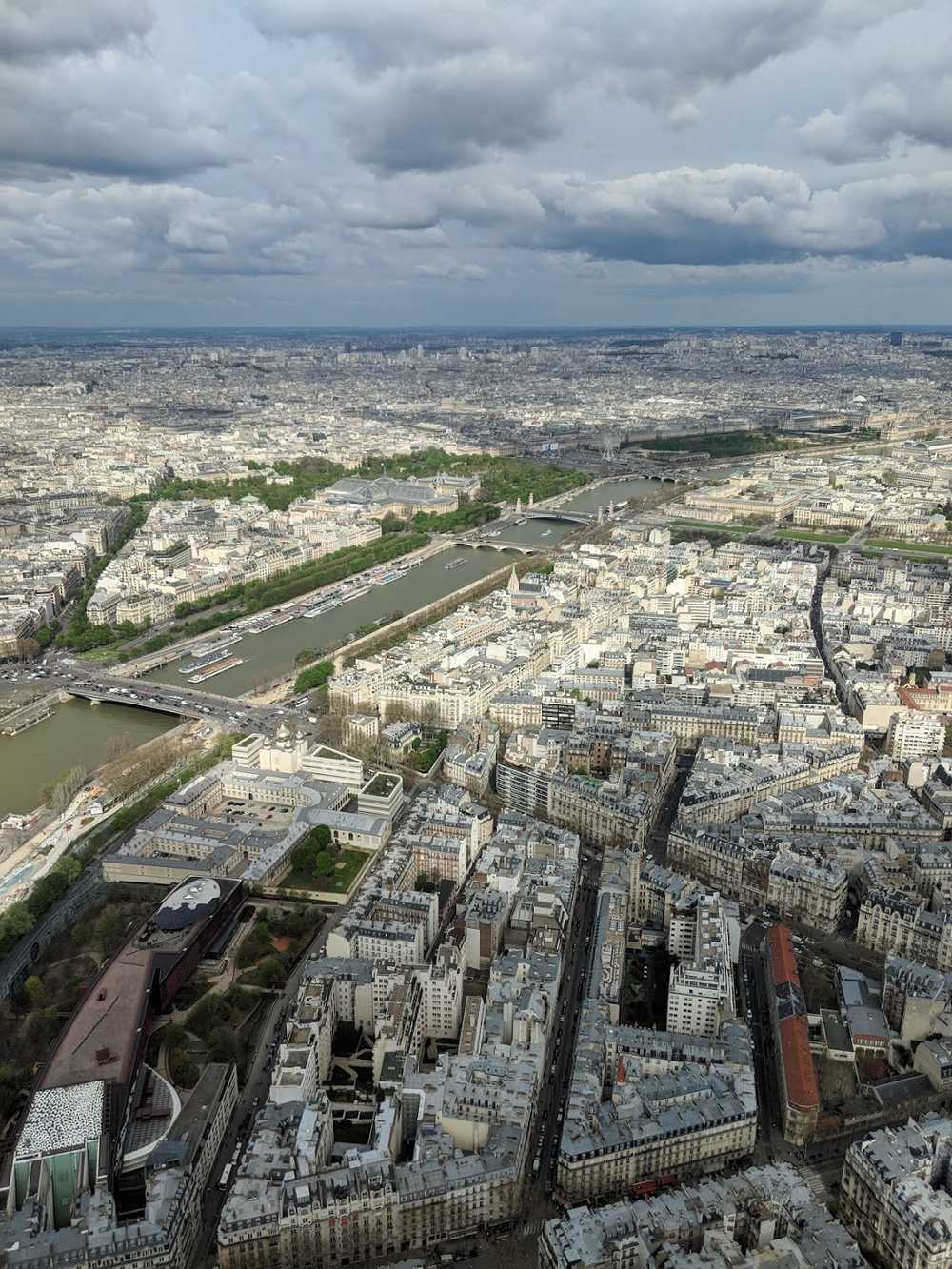 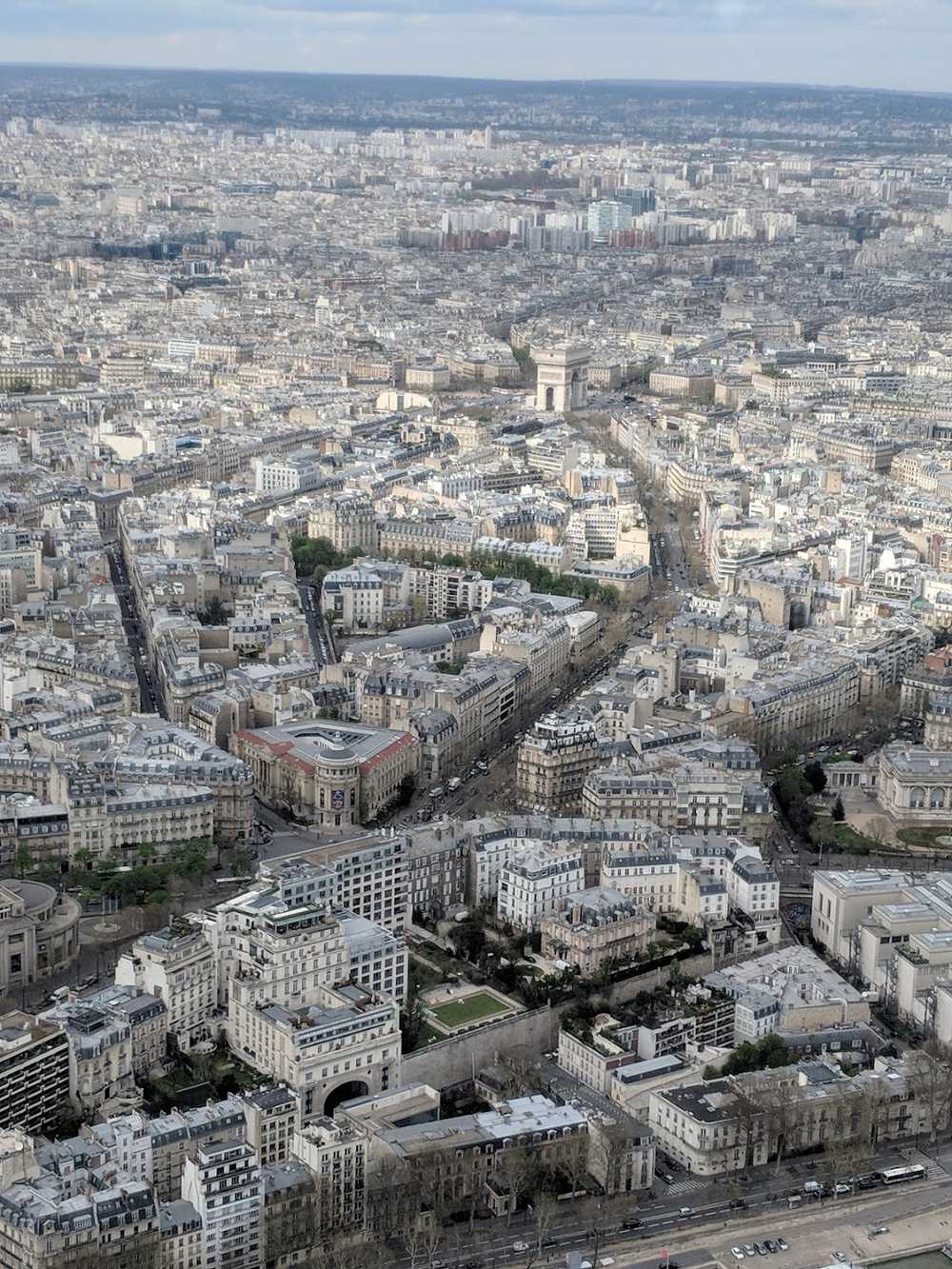 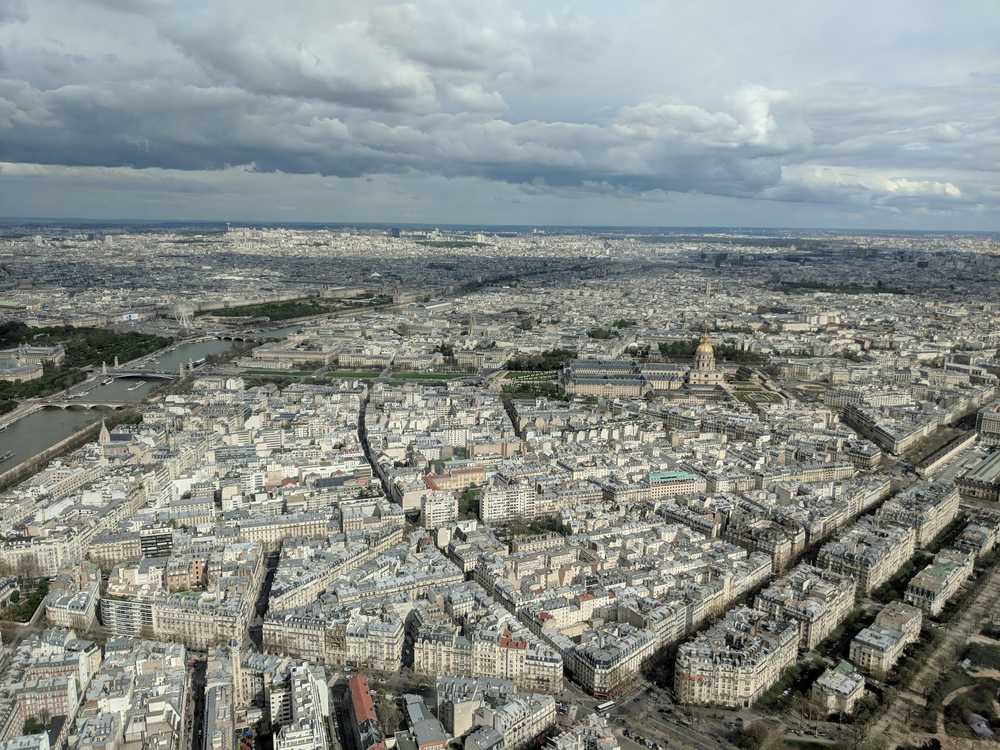 I took the lift back down, and then decided it would be fun to try to walk down from the second to the first floor. There is, of course, a lengthy stairway to do so - they even sell budget tickets that only allows you stairway access (though they'll only take you as far as the second floor). That said, while I don't have any photos, I found the couple minute walk down fairly harrowing, as it really is a weird series of catwalks down. I can't imagine what going up is like.

I took a lift the rest of the way down to ground level, and did a little more walking around the area. Then I made my way to the place I'd seen online and picked out for dinner - Fermier Gourmet! This place is a tiny hole in the wall self-described barbecue place. What this actually means is it's yet another place to get cheap steak fries, though they also had chicken, duck, and fish. 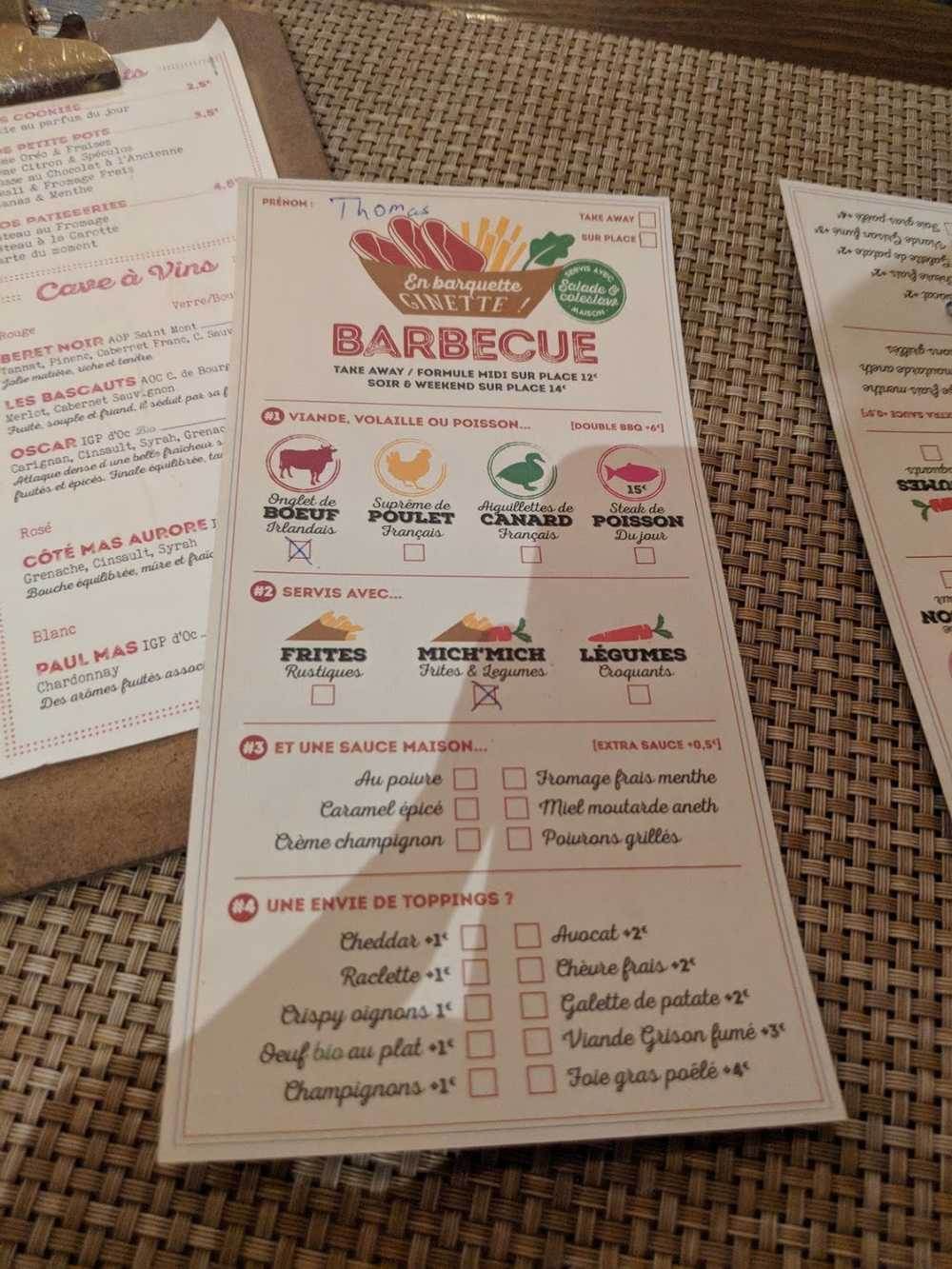 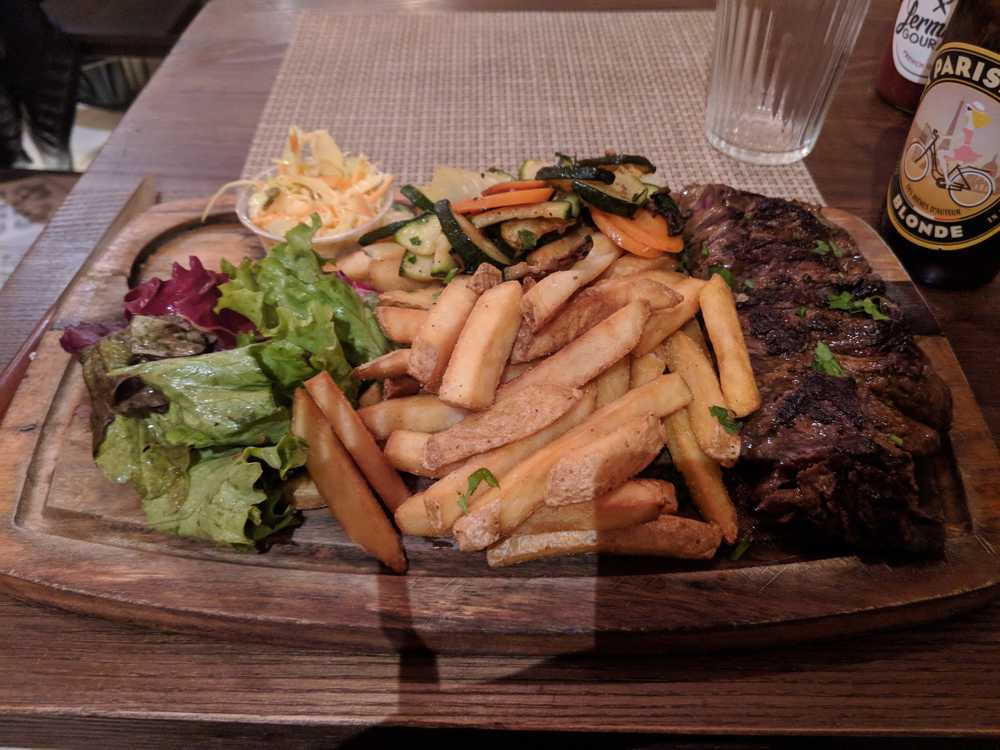 This was the best steak I had in Paris, and maybe one of the best I've had ever, not that I'm much of a connoisseur. It was very tough, and you could tell they made it cheap by getting a cheap cut, but it was so delicious it didn't matter. It also came with some nice roasted veggies, making it feel slightly healthier than the average steak frites. It was also rare: 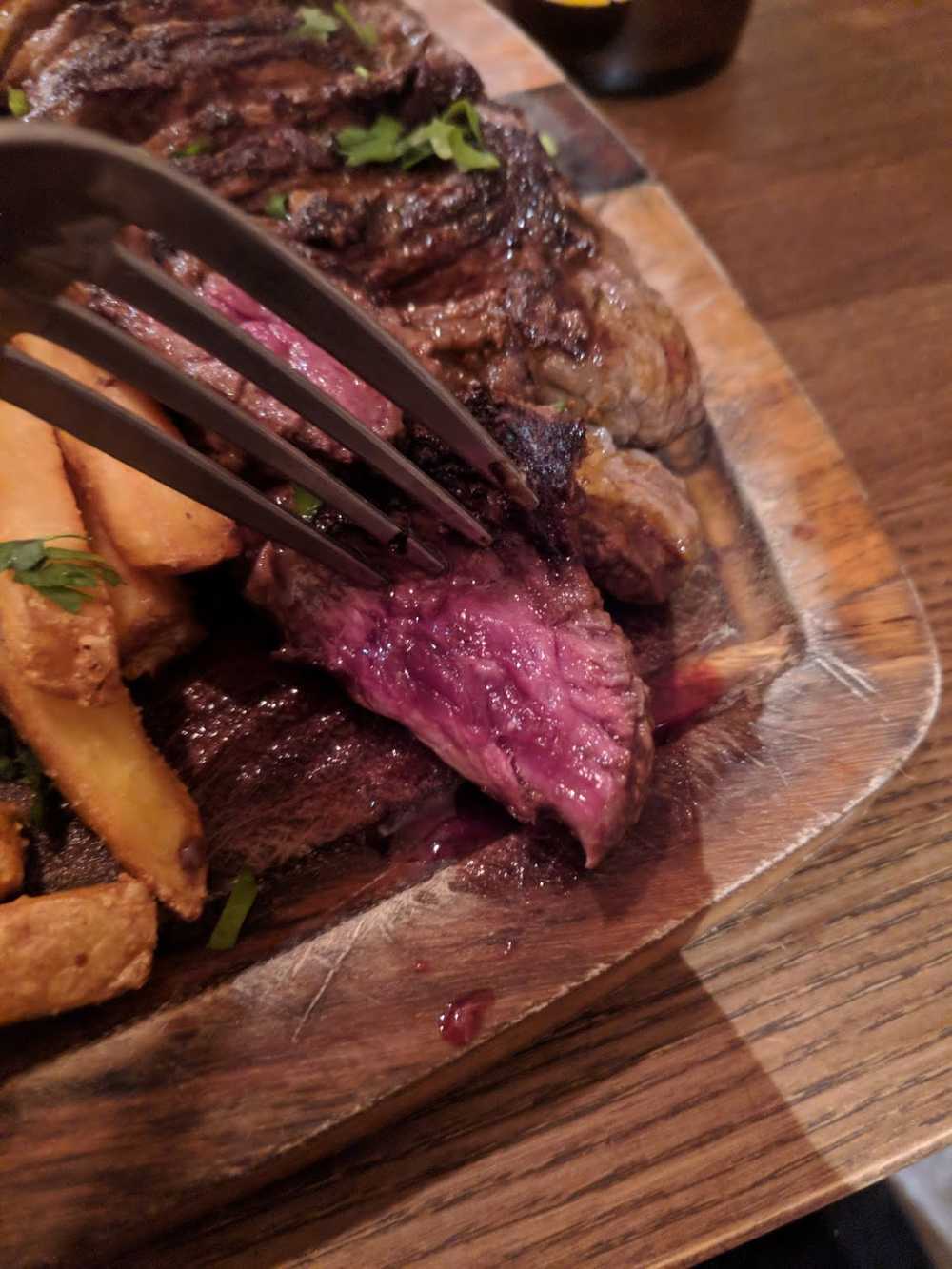 On the way back home, I passed some people dancing in a plaza. No idea what this was about, but it was very charming. 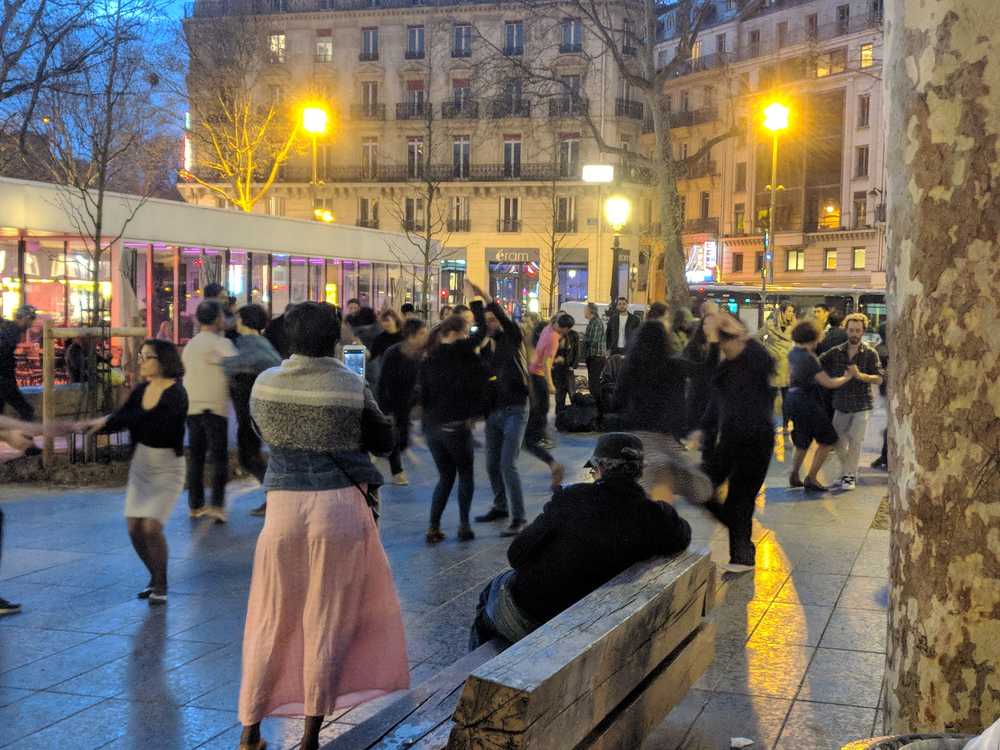